Chris Brum and Hugh Lyford were extremely excited to begin the adoption process in early 2020. By March, they were set up with their birth mother and learned they would be hopefully adopting twins! They planned to travel to Hershey from their home in San Diego when the babies were born in mid-to-late August.

Much to their surprise, the babies were born on July 30—eight weeks earlier than planned, arriving before Hugh and Chris boarded their plane.

“The babies were born at about 32 weeks and there was little-to-no notice,” Hugh said. “We had gotten a call from the birth mother that she was headed to the hospital and thought she may be going into labor. Literally two hours later we were at the airport to board our flights to get to the East Coast.” 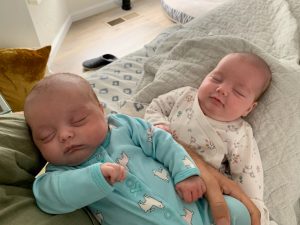 They continued their trek, determined and excited to meet the twin girls at the hospital and be there for them as they continued growing in the NICU at Penn State Children’s Hospital. After they took a red-eye flight overnight to Washington, D.C., Hugh and Chris immediately rented a car to drive to Hershey.

As Hugh and Chris continued their journey to the hospital via rental car, they wondered if there was a Ronald McDonald House in the area that they could call. About two hours later, the staff at RMHC of Central PA returned Hugh and Chris’ call to help keep them close to their newborn babies.

“There is a Ronald McDonald House near us in San Diego and we were aware they helped families, but we didn’t know until we were in Hershey that Ronald McDonald House Charities could give us a place to stay and provide so many other services to us while our daughters were in the hospital,” Chris said.

Looking back, Hugh said having Ronald McDonald House Charities of Central PA was a “godsend.”

“There were so many things that were up in the air, so much uncertainty, and the Ronald McDonald House was one thing we could count on,” Hugh said. “After the craziness of this day is over, we know we have somewhere to go to put our stuff, lay down, and get some sleep—which was invaluable to us at that point.”

Hugh and Chris ended up staying with RMHC of Central PA for a total of 28 days as their daughters were healing in the NICU. Although they arrived in Hershey with no plans, RMHC of Central PA was able to pay for their family to stay in a hotel nearby until they were able to be moved into the House. 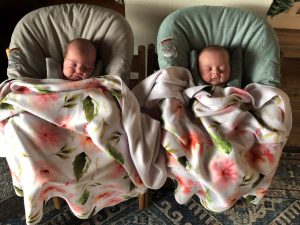 “Even once we did connect with the Ronald McDonald House, we did not expect the generosity we received,” Hugh said. “We thought maybe we would get a couple days of help, and the fact that they were able to help us for our entire stay—totaling 28 days—was just amazing.”

“It was such a relief because the girls were very compromised in the beginning and it just allowed us to focus on them,” Chris said. “And when we were able to move into the actual House, it was just so great because we were able to walk to go see them every day and save a lot of money and prevent financial stress during an already stressful time. It was just such a relief.”

Hugh and Chris also commented on Ronald McDonald House Charities of Central PA’s commitment to health and safety amidst the ongoing pandemic.

“Being in the House, we felt so safe. They had thought of everything in terms of how they could keep every family safe,” Hugh said. “They knew that the parents staying at the House were all going to see really sick kids—kids whose immune systems just could not tolerate anything beyond what they were going through, and we really appreciated the extent to which safety and staying healthy was prioritized.” 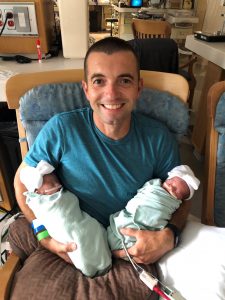 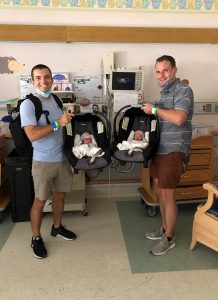 “It felt like home,” Chris said. “The fact that we didn’t have to worry about dinner every night and were able to get a cup of coffee—those things that may seem little made such a difference.”

“Having dinner provided was essential. Especially during Coronavirus-times, when you don’t necessarily want to risk going to a restaurant knowing you are visiting babies in the NICU, even if you had the time to, you don’t want to expose yourself when you don’t have to,” Hugh said. “And because of the generosity of Ronald McDonald House Charities we didn’t have to take that risk.”

“We were able to be with the girls longer and spend more time with them in the NICU because we knew dinner and where we would be staying would be taken care of each night,” Chris said.

Despite these unprecedented times, Ronald McDonald House Charities of Central PA was able to help keep the Brum-Lyford family together free of charge thanks to our generous donors! And even better? The beautiful newborns, Ella and Emma, are doing great in their new San Diego home with their fathers! 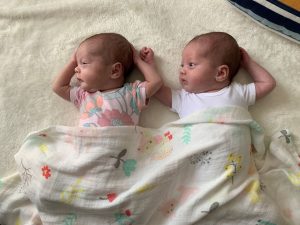 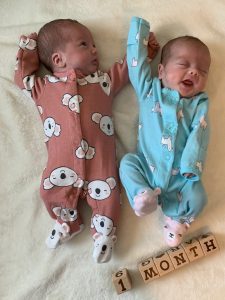